ADD TO WAYNE GRETZKY'S long list of accomplishments this: he was a rotten guest.

The occasion was the 35th National Hockey League All Star Game, being held for the first time at Long Island's Nassau Veterans Memorial Coliseum, the place the best team in hockey called home.

It turned out to be a rather unhappy affair for the locals, thanks in no small part to number 99.

It's not like he put a lampshade on his head, danced on the buffet table, then barfed in the punch bowl. This was more akin to wearing the same dress as the hostess, but looking way hotter.

It was Feb. 8, 1983 and the old barn was spruced up as much the built-on-a-budget concrete and cinderblock arena could be. Four members of the three-time reigning cup champion New York Islanders and their coach, Al Arbour, were on hand to greet The Great One and his Campbell Conference confreres.

Welcome to our house... May we take your coats?

Unlike today's All Star game, which is a couple of players short of a team and edges ever closer to sneaker-wearing players slapping an orange ball across a gym floor with plastic sticks, this mid-Winter classic was a true showcase for the creme de la creme of la Ligue Nationale de Hockey.

Then as now the LNH was split into two conferences, each consisting of two divisions. All of those groupings were named in honor of figures from the league's illustrious past, leaving all but the most dedicated fans in the dark about geographic points of origin. The eastern conference was named for the Prince of Wales, while the west honored a commoner, long-time league president Clarence Campbell.

Though augmented by the incumbent Norris Trophy winner, Blackhawks defenseman Doug Wilson, they had an apparent problem in goal. 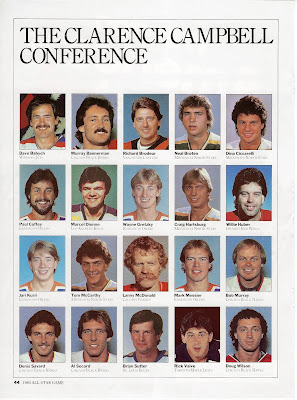 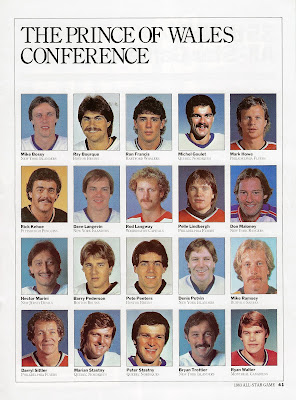 While Chicago's Murray Bannerman started the game, his intended alternate, the Vancouver Canucks' Richard Brodeur had sustained an ear injury days earlier, leaving the Campbells short of a net minder and the Canucks without a representative (each team got at least one).


So Brodeur's Vancouver backup, John "Cheech" Garrett -- acquired just days earlier from the Nordiques -- became the Canucks' designated star. He'd have stolen the show, but for ostentatious number 99, flaunting his... you know... talents.

Here's how that went down.

Quebec's Goulet opened the scoring early in the first period, with an assist from fellow Nordique Peter Stastny (whose son, Paul, now plays for the St. Louis Blues). Eight minutes later, Winnipeg Jets defenseman David Babych answered back, tying the game with aid from Mustache and the Blue's Brian Sutter. At 19:01, the Bruins Bourque un-tied it and the teams ended the opening segment with the score: Wales 2, Campbell 1.

Polite company. Cocktails and hors d'oeuvres for everyone.

Early in the second, Minnesota North Star Dino Ciccarelli got the equalizer, with help from fellow North Star Neal Broten and the Blackhawk's Al Secord.

Midway through, starting goalies Bannerman and Pete Peeters were swapped out. Garrett came on for the Campbells and the Flyers' Swedish net minder Pelle Lindbergh, just 23 and in his first full NHL season, took over for Wales. Then, North Star Tom McCarthy put the west ahead with assists from Ciccarelli and the Blackhawks' Bob Murray.

Rumaki anyone? A bite-sized quiche perhaps? What was that noise in the other room?

In the third period, the guests became unruly. Uncouth.

Gretzky, held off the scoresheet for more than 45 minutes, scored with assists from Kurri and Coffey (or perhaps curry and coffee) at 6:20. McDonald added a goal, from Sutter and Dionne, pushing the margin to 5-2 a minute later. Then Gretzky struck again, with help from Messier and Kurri.

New York Rangers forward Don Maloney -- who years later would serve as the Islanders' general manager -- answered back with help from New Jersey Devils delegate Hector Marini. It was a last stab at respectability at 14:04 and it would not last.

The final 5:56 would be pure humiliation on the order of hitting on the host's date in front of everyone and then leaving with her. It was that bad.

Gretzky scored again at 15:32, his third goal in nine minutes, with assists from Wilson and Messier, and he wasn't done. Toronto's Rick Vaive added another tally for the Campbell Conference, beating Lindbergh unassisted. 8-3. Then, with just 42 agonizing seconds remaining, 99 scored yet again with more help from Messier for a 9-3 final before a stunned crowd of 15,230.

The four-goal outburst was an NHL all star game record. Gretzky walked away with Most Valuable Player honors and, while he didn't really get the girl (and if he did, it wasn't reported) he did get a $14,000 sports car.

The host Islanders? They got a measure of revenge that spring, sweeping Edmonton to win their fourth (and to date last) cup on that very same home ice. They held the Oilers to just six goals over four games and kept Gretzky -- he of the 71 regular season goals and 125 assists -- scoreless.