FAKE NEWS ain't new, but there was a time when it was fun. Good, snarky fun.

Somewhere along the continuum that started with lies, dogma, doctrine, propaganda and spin, such fakery branched off into brilliant parody and satire, the sublime talent of tweaking the real and making it ridiculous. 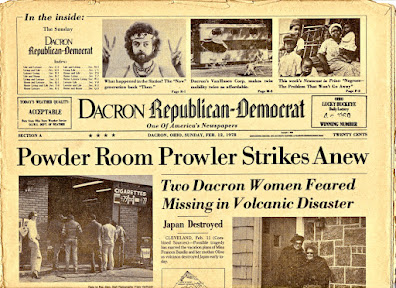 It hit an artistic peak 40 years ago this week with the National Lampoon Sunday Newspaper Parody, a multi-sectioned send-up of everything right and wrong with the pile of newsprint delivered weekly to doorsteps all over America and a kind of fun house mirror image of the country itself.

Done so rightly, so completely, so perfect to the last block of agate sports section type, that without close inspection, the Sunday, February 12, 1978 edition of the Dacron Republican-Democrat -- One of America's Newspapers can almost pass for the real thing.

Its heritage can almost certainly be traced back to Mad Magazine, born in comic book form in 1952 and transformed into a news magazine mockery three years later.

One of them, P.J. O'Rourke, is credited with conceiving the Dacron Republican-Democrat as a kind of sequel to the NL's High School Yearbook parody (which, itself, gave rise to National Lampoon's blockbuster movie Animal House). O'Rourke's wingman in the newspaper project was future Hollywood auteur John Hughes, the man who gave us National Lampoon's Vacation, Sixteen Candles, The Breakfast Club and Ferris Buehler's Day Off.

O'Rourke, Hughes and company, in the guise of deranged newspaper creators, writers and editors, skewered fame, parochialism, perversity, insecurity and thriftiness. Nothing was sacred and nobody was safe, not even good ol' Charlie Brown, ridiculed as "Ol' Weepy Whiner" in the full-color comics section.

Starting from page one and threaded through the paper were repeated references to a fiendish local predator known as "The Powder Room Prowler," with hints the perpetrator may be the paper's publisher and moral crusader, Rutgers Gullet.

Below the fold on the front of section C -- the Living Life section -- a story with the vexing headline, "Is Your Child a Dip?" On and on it went, through the sports second, the weekly magazines and the Swillmart discount store circular. Check the Scoreboard section, pictured here, for the reference to allowing ads to be place on baseball team uniforms and on the outfield grass. It was only funny because it wasn't true. Yet.

Real estate listings note "the famous Fazullo Murder house is on the market," and a full-page ad for the Food Clown supermarket features a 12-pack of diet Perrier for just $2.19.

Sure other parodies have been published with clever titles like Not the New York Times and the Off The Wall Street Journal and The Onion has since institutionalized the ingenious, but for sheer depth of depravity, it's hard to top the Dacron Republican-Democrat.

Don't take my word for it. You can see it for yourself at America's monument to freedom of the press, The Newseum in Washington DC, where the Sunday Newspaper Parody is one of nearly 400 historic newspapers on permanent display.