Nightmare in a Cardboard Box: The September 11 Papers

TWENTY YEARS ON and I can still recall everything I did that day.

To be clear from the outset, I was -- relatively speaking -- outside the zone of physical danger, in an office building in midtown Manhattan. "Still too damn close," my cousin in Florida told me that evening. 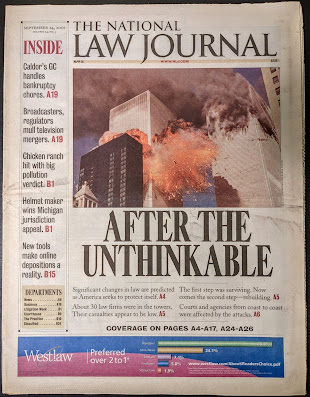 So far away, yet close enough to see from an office window the World Trade Center towers burning and then watch from the same vantage point as the top of the north tower, suddenly enveloped by a billowing cloud of smoke, splintered and sank from view.
In 1975 I had the misfortune of being on a road running alongside New York's John F. Kennedy International Airport when an Eastern Airlines jet on final approach from New Orleans got caught in a microburst and crashed just short of the runway, killing 113 people.
Again, in relative terms, I was outside the zone of immediate danger. I still have nightmares inspired by that day. But it was an isolated, discrete, incident and, more importantly, a genuine accident, whereas the events of September 11, 2001 were not.
I'd arrived from work that morning after voting in the city's primary election. As I walked north on Madison Ave., people on the street were standing still and pointing south. I'd no idea what the commotion was about until I'd gotten upstairs, where my editor greeted me with, "You know what happened, right?"
I didn't until he directed me to a west-facing window, told me to lean out as far as I could then look south. There, the north tower stood, with a smoking hole in its façade. 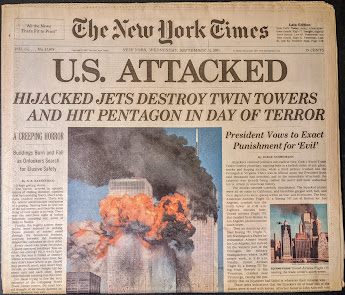 As a reporter, one's immediate reaction is to observe and report. Not knowing what lay ahead, I ran from the office to the nearest drugstore to buy a disposable camera, believing the fire would be put out, the hole repaired and the incident would become part of the city's lore, like that day in 1945 when a fog-bound B-25 bomber smashed into the Empire State Building.
The cheap camera's pictures turned out poorly, but in my mind's eye -- aided no doubt by the unprecedented media coverage -- they're crystal clear, as are the TV and radio news reports, the first-hand visual confirmation, the deepening dread as events unfolded, the not knowing which blow would be the last.
I pitched in on my newspaper's coverage that day, and on those that immediately followed. 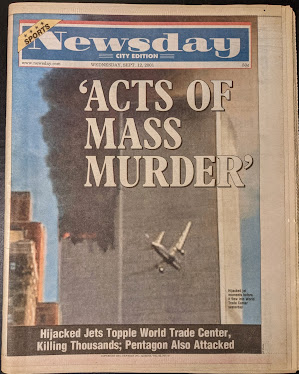 Nearly 3,000 people died on what began as a sparkling clear September morning.
Somehow, those I knew who worked at the complex all survived, one because he found an intact stairway out of the south tower above the point of impact, another because he was fortuitously late for work.
Among the recognizable names of the dead was someone I'd known back in day camp, where he took an arrow to the eye in an archery accident.
Arriving home in Queens that evening, I found my girlfriend awaiting my emergence from the subway. We held each other tightly, staring westward at the plume of smoke across the sky, trying to comprehend the awfulness. We watched the news, talked and slept fitfully before I woke to head back in.

The Manhattan of September 12 was nightmarishly still. Subway traffic was halted south of Grand Central Terminal. Walking the last dozen blocks to my office, through that silent, desolated midtown at what now wasn't rush hour, was an experience I'll never forget.

In the years since, I've read novels that have tried and failed to capture the feeling of that day, and tried to watch movies that nail it so well I needed to turn them off. The emotions are hard to harmonize. So I fall back on the immediate documentation. 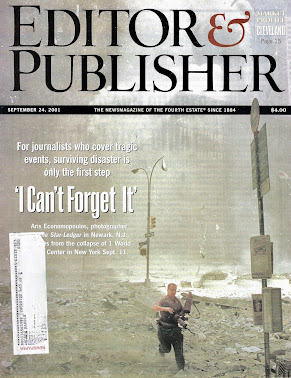 A saver of things since boyhood, a habit or human failing that's provided the backbone for this blog, I reflexively kept the newspapers published on that terribly quiet next day, and periodicals from the days and weeks that followed.

It seemed, and still seems, wrong to discard them, wrong to diminish the record of that terrible day. For 20 years, they've been in a cardboard box, one of many in a closet dedicated to my compulsion to retain printed matter, an urge undimmed by the evaporation of tangible media, newspapers and magazines, movies, music and books.

"Time it was and what a time it was, it was a time of innocence, a time of confidences. Long ago it must be, I have a photograph. Preserve your memories, they're all that's left you." -- Simon & Garfunkel.

AS A BASEBALL FAN, it was easy to admire Derek Jeter's abundant success. As a New York Mets fan, it was hard not to resent it.

The former New York Yankees captain will be inducted into the Baseball Hall of Fame today and I'd be dead wrong if I said he didn't deserve it. He played for 20 seasons, accruing 3,465 hits, a Rookie of the Year award, more than a dozen All-Star selections, five Gold Gloves, five Silver Slugger awards and played on five championship teams.

But still, the green eyed envy monster would rather not hear about it.

First time I saw Jeter play, he was penciled in as shortstop for the AA Albany-Colonie Yankees, who were playing the New Haven Ravens at the Yale Bowl on July 30, 1994.

Rocketing through the Yankees farm system, he was batting .363, with 41 hits in just 113 at bats, 11 of which went for extra bases. He'd also walked 15 times, struck out 16, driven in 13 runs and registered a dozen steals.

Jeter had started the year in Single-A Tampa and would rack up just nine more at bats -- and five more hits -- for the A-C Yanks before being promoted to AAA Columbus. Somehow he'd spend almost all of 1995 there, stuck behind Tony Fernandez and Randy Velarde on the Yankees' first wild card team.

Appearing in 15 big league games, he was briefly teammates with the man he'd spiritually replace and ultimately follow as the Bombers' captain, Don Mattingly, then in his last season as a player.

Jeter took over as starting shortstop in 1996, winning the American League's top rookie honors, while the Yankees won their first World Series since 1978, an almost unimaginable drought for them that coincided with the powerful Mets teams of the 1980s.

In '96, the Mets had promoted their own snazzy shortstop, Rey Ordoñez. And, while the Cuban-born Ordoñez couldn't hit like his crosstown counterpart, he could field his position like few others ever had.

The New York Times interviewed both for a feature titled My Shortstop is Better Than Yours, but the parity didn't last.

Ordoñez finished just fifth in National League RoTY balloting but gained instant recognition for his defensive acrobatics, winning Gold Gloves in 1997, 1998 and 1999, before being derailed by broken arm sustained in a mid-2000 season collision, after which he was never the same.

By that time, Jeter was already being kissed by fate, benefiting from Yankee fan Jeffrey Maier's hauling in a deep fly to right, converting it to a home run, kissing up to his manager, whom he respectfully if not obsequiously called "Mr. Torre," -- as dutifully reported by a fawning press -- and literally kissing pop star Mariah Carey, Miss Universe Lara Dutta and others.

The Yankees, who were capturing championships while Ordoñez was collecting his singular hardware, faced the Mets in the 2000 series and took the first two games, each by a single run before the Mets broke their momentum with a game 3 win.

Jeter led off the potentially pivotal game 4 by rocketing the first pitch of the night from Mets starter Bobby Jones into Shea Stadium's left field bleachers. The Yankees, who never trailed in the game, won 3-2, and took the series the next night.

The next season saw the Yankee shortstop make perhaps the signature defensive play of his career, in the A.L. Division Series, a maneuver that came to be known as "The Flip." It seemed the shortstop could do little, if anything, wrong. He'd even starting collecting Gold Gloves some say were undeserved, as well as Silver Slugger honors.

In 2003, he was named the franchise's fifteenth captain, putting him in the company of luminaries such as Babe Ruth, Lou Gehrig, Thurman Munson and Mattingly.
In 2003, the Mets... well, don't ask. In this tale of one city, it was the best of times for Derek Jeter, the worst of times for the team from Queens. The obsequious Bronx mainstay played on, partaking in another Yankees championship and living his charmed life as the Mets' fortunes rose and fell.

Then his own body betrayed him in game 1 of the 2012 A.L. championship series.

It was a stunning "behold a god who bleeds" moment, and a reminder that for all his exploits, for all the acclaim, for all the objectification, he was only human, exceptionally talented, gifted even and fortunate, but still just flesh and bone. He retired after 2014.

Jeter's Hall election came with 99.7 percent of the vote, the highest ever. He was selected on all but one of 397 ballots cast, a triumph of the hype. Other immortals were at least as deserving. But then why am I writing about him?

Posted by Andy Harris at 8:47 AM No comments: