Forty Years of Darkness on the Edge of Town

BRUCE SPRINGSTEEN LOOKS LIKE a doofus. Admit it. He does. 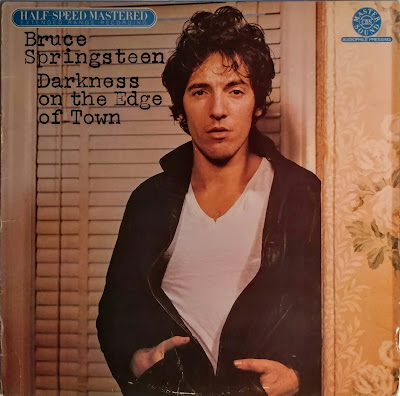 The cover pic for Darkness on the Edge of Town does him no favors. Bed-headed, bleary eyed, lips midway between pursed and puckered, he looks like photographer Frank Stefanko rolled him out of bed at 3 a.m., said, "here, put this on..." and before the Boss could say, "Wait. What?" they were done shooting. It is not a flattering picture.

Which is odd because the album it graced is about a lot of things, work, faith, hope, sex, anger, resentment, resignation, determination and driving, literally and figuratively, but I wouldn't put weary dishevelment on the list.

Still, Springsteen's fourth studio LP turns a biblical 40 years old on June 2, so maybe it's only fitting that the journey with him to The Promised Land also starts with a bit of skepticism about the intended destination. The ransom note-typewriter typography of its title and track listing seem to beg the question: would you buy a record from this man?


Badlands, you've got to live it every day,
let the broken hearts stand as the price you've gotta pay.
We'll keep pushin' till its understood
and these badlands start treating us good.

I did. More than once. In different formats. Others did too. And looking back across four decades, it's not hard to find the reason: Darkness -- sandwiched as it was between the fabulously bombastic Born to Run and the two disc tour-de-force The River -- is the definitive Springsteen album.

More than any other release, this one is responsible for his enduring image as a voice of the forgotten blue collar man trapped by circumstance and grinding it out until that nighttime rendezvous in the field behind the dynamo, or after walking the darkness of Candy's hall. 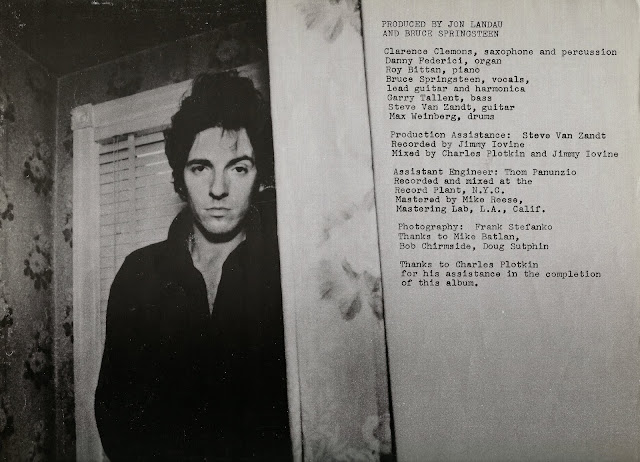 Springsteen was just 28. Success, as he defined it, was still eluding him. Any guy in his mid-20s, working for unreasonable bosses, chasing unattainable girls and realizing that adulthood meant fighting for what you want and who you are, could relate. I certainly did.


But your eyes go blind and your blood runs cold.
Sometimes I feel so weak I just want to explode.

My dad once called him, "the working man's millionaire." After many years of success, even the Boss himself admitted being "a rich man in a poor man's shirt." But we all know he didn't start out that way... that all this wiry kid from Freehold, New Jersey, had was that burning ambition to be somebody and it took some time for that image of who, exactly, to come into focus.

On his first three LPs, Springsteen was something of a chameleon: a stream-of-consciousness lyrical poet for Greetings From Asbury Park, a soulful troubadour on The Wild, The Innocent and the E Street Shuffle and then the leather jacketed street hustler with the spectacular B.T.R., an album that put him on the cover of Time magazine and Newsweek in the very same week.

All that momentum slammed to a halt when Springsteen decided to break up with manager Mike Appel. Their three-year legal battle keep him out of the recording studio but continuing to tour and more importantly, to write. He poured out his frustrations and anger at The Man in a torrent of lyrics, enough for several albums. Out of that frenetic activity emerged Darkness, a record unlike anything he'd done before: a collection of angry, chip-on-his-shoulder rockers, full of searing guitars, slamming drums, coarse vocals and testosterone.

He comes across as angry, defiant, forever done taking shit from anyone. There's none of Born to Run's romantic optimism, none of the good time bonhomie that would temper the more fraught moments of The River. Darkness is 10 tracks of darkness and Old Testament thunder.

Beneath all that there's a recognition that life doesn't play out the way its planned. Despite the bravado of driving 'cross the Waynesboro County line, down Kingsley and from Monroe to Angeline*, there's the sad surrender of the trophy girl in Racing in the Streets and in the title track finale where the narrator admits the enemy is within.


I lost my money and I lost my wife,
them things don't seem to matter much to me now.
Tonight I'll be on that hill 'cause l can't stop,
I'll be on that hill with everything that I've got,
Lives on the line where dreams are found and lost
I'll be there on time and I'll pay the cost,
for wanting things that can only be found
in the darkness on the edge of town.

Despite its significance, Darkness seems more respected than loved. Its songs inspired a spinoff,  covers, imitation and parody, but when it comes to ranking the Boss's records, it's almost never the fan favorite. Not here, nor here or here and definitely not here, although finally, here. 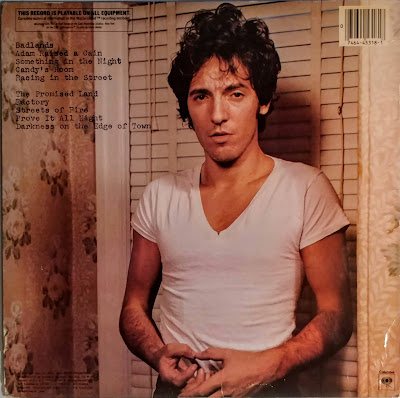 It's often second-best, which is a shame, because while others may better define his career, none of them better defined the man.

* For Bruce, geography is a thing of the mind. The Promised Land opens with the narrator driving out of the Utah desert and across the Waynesboro County line, but there is no Waynesboro County anywhere in the U.S.  Nor, Prove It All Night fans, is there a place called Angeline, though there are plenty of starting points called Monroe, including Monroe Township, New Jersey.

Something in the Night lovers take heart, you too can drive down Kingsley with the radio up so you don't have to think. It's in Asbury Park, NJ. Send a postcard if you go.

WHAT I REMEMBER MOST is the beer fight.

It happened to just our left and I've no idea what started it. Suds and cups flying across rows of the upper deck section 313, accompanied by angry words and then by fisticuffs. That last component attracted what seemed to be every security guard on duty at Giants Stadium that evening. They appeared to be old policemen wearing yellow rain coats.

Somehow they restored order, allowing me, Ed, Lonny and the rest of the fans in the neighboring sections to turn their attention back to the matter at hand: the New Jersey General vs. the Birmingham Stallions, a contest capping week 10 of the United States Football League's inaugural season.

It was Monday night, May 9, 1983. Earlier that evening, me and my buddies had set out from Long Island, driven across New York City and to the New Jersey Meadowlands to bear witness. To what, we didn't really know.

It was really baseball season, but the Mets were at the Astrodome and the Yankees were off, so... it was springtime... for football... in East Rutherford. Newfangled football, starring Herschel Walker, a precocious 21-year-old Heisman Trophy winner who'd turned pro after completing his junior year at the University of Georgia.

Though a year too young for the National Football League draft, he was just what the Generals and the nascent USFL needed. Signed to a $5 million three-year contract, his job wasn't merely to carry the ball, rather it was to carry the league.

Not yet on the scene, New York real estate mogul and entrepreneur Donald Trump -- yes that Donald Trump -- who later bought the team from its original owner, Oklahoma oil baron J. Walter Duncan, then fatefully decided to take on the far wealthier and entrenched NFL.

Walker held up his end of his deal, entering the game as the league's leading rusher. He was aided by fullback Maurice Carthon, who would later play for the NFL's New York Giants at the same address, receiver Mike Friede who had played for the Giants and center Kent Hull, who would play in four Super Bowls with the Buffalo Bills.

But that was pretty much it.

The General's field general was 34-year-old Bobby Scott, who spent nine years with the New Orleans Saints, backing up star quarterback Archie Manning while starting only 14 games himself.

The Stallions' signal callers, Bob Lane and Reggie Collier, weren't significantly better, but on this night they wouldn't have to be.

Though Scott connected with receiver Tom McConnaughey for a first quarter touchdown and a 7-0 lead, Birmingham's running game quickly got the equalizer. Then, the visitors turned the game over to their stout defense and a place kicker named Scott Norwood -- yes, that Scott Norwood -- who booted five field goals, while missing a sixth.

Walker earned his keep, rushing for 1,812 yards on the season to lead the league, but the Generals failed to live up to their five-star billing, finishing just 6-12, among the worst in the league. That would change under Trump, who lured Cleveland Browns star quarterback Brian Sipe for season two and then Heisman winner Doug Flutie for season three, also known as season last.

The league's quality of play was generally considered good, though its top tier of talent was thin, but launching a league to rival the NFL was a daunting task. The under-capitalized World Football League had tried to do so a decade earlier and didn't survive its second year before collapsing.

The USFL lasted twice as long before a pyrrhic victory in its antitrust lawsuit against the established league that left them with $3 in damages when they were counting on substantially bigger award to endow their shift to a fall schedule and head-to-head competition.

For the new league, it wasn't just about securing talented players like future NFL star quarterbacks Jim Kelly, who played for the Houston Gamblers and Steve Young of the Los Angeles Express or even running backs Mike Rozier of the Pittsburgh Maulers or Marcus Dupree of the New Orleans -- and later Portland -- Breakers. It was also about securing sponsors, and like the players, most of the best were already committed to the established league.

Still, the upstarts had 12 franchises arrayed from coast to coast -- including the Tampa Bay Bandits part owned by movie star Burt Reynolds, the Chicago Blitz led by longtime NFL head coach George Allen and the Denver Gold led by Super Bowl XII Denver Broncos coach Red Miller -- and there were sponsors eager to get in on the ground floor with the new venture.

That wasn't nearly enough to sustain it, but it gave the USFL a look and style all its own.


Special thanks to www.usflsite.com for filing in some of the blank spots in this 35-year-old memory.

Posted by Andy Harris at 8:39 AM No comments: