Tales from the College Football Orphanage

IT WAS A LITTLE NOTICE about a team whose problem was they attracted little notice. It stung all the same. 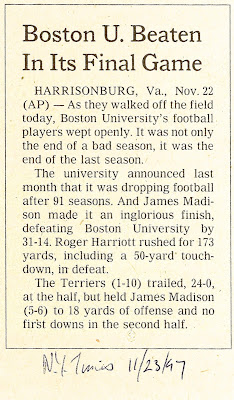 College football is like a religion for people in many parts of the United States. From Michigan's Wolverines, to Alabama's Crimson Tide, from the UCLA Bruins to the Georgia Bulldogs. There are Huskies and Cougars, Wildcats and Nittany Lions, Badgers, Golden Gophers, Tigers, Bears, Blue Hens, Volunteers and Cavaliers. Each has their revenant retinue of students, alumni and boosters.

I'm not one of them. Despite attending two Division I-AA schools, I'm among that sad set of graduates who've been disenfranchised.

I am a college football orphan.

Twenty years ago this week, Boston University pulled the plug on its 91-year-old football program after finshing its Atlantic 10 season with a 1-10 record. The end was reported in a New York Times news brief not much bigger than an obituary which, in a sense, it was. The paper said there were tears for the Terriers, shed by players, not fans.

Though I'd been out of college for a decade, I'd actually seen them just two months earlier when they played Hofstra University's Flying Dutchmen on Long Island. B.U. touted the game as an alumni event. Having gone to both schools, attendance seemed compulsory. I took my dad. We honored my undergrad and graduate institutions by switching sides at halftime.

The Dutchmen defeated the Terriers, 24-14. I don't recall the game being that close. Like getting together with an old friend, the reunion was somewhat bittersweet and I'd no idea it would be the last time I'd see them alive.

To be sure, it's not like Boston U. football had been much of a calling card for the school (unlike Boston College, which is not in Boston). B.U.'s golden era overlapped my time there when the Terriers were Yankee Conference co-champions three years running and, in the second year, actually advanced to the I-AA quarterfinals before being vanquished by Furman University's Paladins.

Starring for the Terriers then: wide receiver Bill Brooks, who was drafted by the Indianapolis Colts and enjoyed a 11-year National Football League career during which he also played for the Buffalo Bills and Washington Redskins.

Earlier stars had included Miami Dolphins' quarterback-receiver-special teamer Jim "Crash" Jensen and Harry Agganis -- the Golden Greek -- who starred for B.U. in football and briefly for baseball's Boston Red Sox before dying at 26 from a pulmonary embolism.

Boston University just wasn't "a football school" and so 1997's season was its last. Hofstra, however, had other plans. The two programs seemed headed in opposite directions.

In the end, that brief glimmer of bigger time football promise wasn't enough to inspire the dedication needed to keep Hofstra's program afloat. In 2009, a dozen years after the Terriers left the NCAA gridiron, the former Flying Dutchmen too sailed into oblivion.

Forty years ago this week, "We Will Rock You" by the British glam rockers Queen perched at number 41 on the Billboard Hot 100, at the edge of certifiable hit status and on it way to immortality. Ahead of it: Foreigner's "Cold As Ice" at 39, Meco's disco Star Wars theme at 35, Barry Manilow's "Daybreak" at 23 and "Just Remember I Love You" by Firefall at 11.

The number one hit in the USA? "You Light Up My Life" by Debby Boone.

Heard any of those tunes recently?

"We Will Rock You," was the first track for Queen's News of the World, released Oct. 28, 1977. The song spent 41 weeks on the chart, peaking at number 4 the week of Feb. 18, 1978. Today, it's the undisputed champ of that crowd-revving, opponent-intimidating music known as the arena anthem, aka Jock rock.

It didn't arrive alone. It wasn't even the A-side of it's own single. That honor went to "We Are the Champions."  Played in their logical order, they packed a one-two wallop virtually unseen in the post-Beatles pop era, a combination bravura and braggadocio.

The News of the World LP went multi-platinum, selling more than 4 million copies. It also achieved a less well-documented status: the first album I ever bought with my own money.

"Buddy you're a boy make a big noise, playin' in the street, gonna be a big man some day. You got mud on your face, you big disgrace, kickin' your can all over the place..."


In spring 1977, the broadsheet daily Long Island Press went out of business, leaving behind untended routes, log books, canvas bags and customers up for grabs. Newsday had become the island's dominant paper. In the demise of the Press, Rupert Murdoch's New York Post saw an opening.

Me and my best buddy across the street were recruited as freshly-minted paperboys for the sensational and sensationally inky NYC tabloid. Each of us would have dominion over roughly equal territories about a mile square.

Serial killer David Berkowitz, the Son of Sam, was still at large, until he wasn't. "Caught!" blared the Post front page. A lightening strike at a Hudson River power station caused a regional blackout and in that darkness a horrific night of arson and looting across the city: "24 Hours of Terror" the paper exclaimed. Elvis Presley died.

Folding and stuffing all those papers into my bag was a newsprint baptism.

The rest of the neighborhood didn't feel that way. Our so-called subscribers (who'd never actually subscribed, we just started delivering) gradually dropped the Post in favor of Newsday. "It's not you," they said. They just didn't like the Post or what it did to their hands and their clothes.

My pal quit first and his turf became mine. Small consolation as my customers were quitting too. Every week I had less and less. Soon I too realized it no longer made sense to soldier on.


But I'd made and saved some tip money and took some of it to Sam Goody (or maybe it was TSS) to buy my first piece of 12-inch vinyl.

I already had a collection of 45s and a two-speaker Voice of Music stereo on which to play them. But this was a whole album, my only one, and I kept it in heavy rotation. Ask my sister. Ask my parents. Ask the neighbors. Ask them about the Brian May guitar solo.

On the whole, News of the World was, well, spotty. After those first two tracks, there was a notable drop in quality. The most memorable deep cuts were the down-beat "All Dead," the encouraging "Spread Your Wings" and the embarrassingly trashy "Get Down, Make Love." Not that I had anything to compare it to.

Four decades on, its those two opening tracks that still endure. WWRY topping list after list of the best of the jock rock genre, WAtC becoming a kind of gay anthem and then, incongruously, a Donald Trump campaign song. Finally, for your listening pleasure, here they are.