A Legendary Post-Season Clash Gets a 21st Century Reboot

MORE REBOOT THAN REMAKE, and certainly not a sequel, the renewal of post-season hostilities between the Houston Astros and Philadelphia Phillies figures to play out like a lot of modern Hollywood retakes on earlier hits.

The stakes are higher, the staging infinitely more expensive and elaborate, and the settings are completely different.

But whether the 2022 World Series can recreate, let alone exceed the drama of the 1980 National League Championship Series? That tension that left a baseball crazed kid writhing on the floor of his parents' den? That, sports fans, remains to be seen. 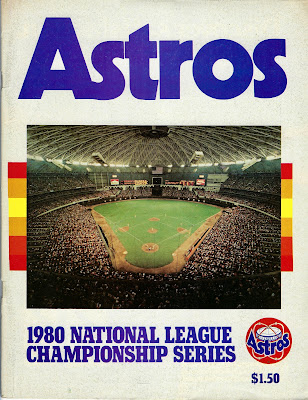 Held in an era when that one middle step from regular season to the final round was mostly just called "the playoffs," the 1980 NLCS was played entirely on artificial turf in Philly's since-imploded Vet, and in the Houston Astrodome -- once the "Eighth Wonder of the World" -- now a modern ruin.

It was a best-of-five series that went the distance and then some. Four contests were decided in extra innings, including the clincher. Pete Rose tried to take the very large head off a catcher-be-famous-later.

There were 11 stolen bases, and just one home run. And there was a triple play that wasn't, because NL President Chub Feeney said it wasn't.

There were Houston's tequila sunrise uniforms, Philadelphia's powder blues, Howard Cosell in the booth, and a quartet of future Hall of Famers hoping to be difference makers.

Though their 93 wins paced the National League, back then it was the Astros who were the upstarts, making their first post-season appearance ever.

The Phillies were back for the fourth time in five years, having lost in '76 to the Rose-led Cincinnati Reds, and to the Los Angeles Dodgers in '77 and '78. A founding franchise in the senior circuit, they'd only ever won two pennants, in 1915 and 1950, and never a championship.

Now Rose was on the Philly side. So too was hard ass manager Dallas Green, who upon taking over for the deposed Danny Ozark, preached "we, not I," and drove his underachieving squad to succeed, even if that meant they hated him.

While lacking comparable bling, the Astros were not without their weapons, chief among them, free agent acquisition Nolan Ryan, baseball's first $1 million per year pitcher, who briefly formed a flame-throwing tandem with J.R. Richard.

Richard though, was felled by a midseason stroke from which he'd never fully recover.

Hosting, the Phillies fell behind in the third before rallying to take the opener, 3-1. It would be the only game decided in regulation.
Game two to saw the guest Astros again take an early lead and lose it, only to regain it in the top of the eighth, lose it again in the bottom half of the frame, then score four in the 10th to pull away. 7-4.

Back in Houston, game 3 was a nail bitter, scoreless through regulation before the Astros walked it off on a bases loaded sac fly in the 10th to take a 2-1 series lead. The home team was one victory away from its first pennant, the visitors only a loss away from yet another wasted campaign. 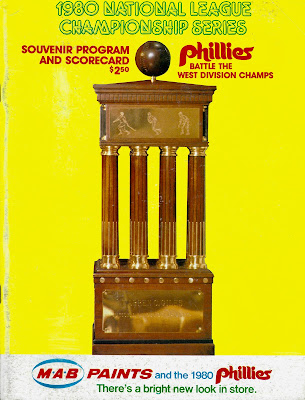 Houston struck early in the potentially decisive game 4, holding a 2-0 lead until Philly posted three in the top of the eighth. The Astros tied it with a walk, a sac bunt and a base hit in the bottom of the ninth, sending yet another game into extras.

The Phillies, however, strung together a single and two doubles to plate two runs, holding on to knot the proceedings at two wins a piece.

Game five would be win or go home, and again Houston struck first with an RBI double by Cruz in the first, scoring outfielder Terry Puhl. Philly responded immediately, with two in the top of the second off Ryan.
The Astros fought back with one in the sixth and three in the seventh, 5-2 Houston heading into the eighth inning at the Eighth Wonder. The Phillies, unbowed, posted five runs -- the biggest single inning in the series -- to pull ahead, 7-5, but Houston came right back to tie it.

There it stayed until the top of the 10th when doubles by Del Unser and Maddox plated the winning run, 8-7. Game, set and match.

The Phillies had their first pennant in 30 years and, days later, would lock down the first championship in their 98-year history.

The ensuing 42 years have seen the Phillies win four more pennants, though just one more championship. The Astros captured their lone NL flag in 2005, lost the Series to the Chicago White Sox in a sweep, did a complete tear down, moved to the American League and emerged a perennial, albeit tainted, powerhouse.

Now, with Houston housed in a Juice Box and Philly in a band box, with analytics, launch angles and exit velocities ensuring a plenitude of home runs, with future Hall of Famers like Justin Verlander, Jose Altuve and Bryce Harper, in an era when everyone's a million dollar ballplayer, they battle again, this time for all the marbles.

Posted by Andy Harris at 8:58 AM No comments: