Sex and the Spider-Man

PETER PARKER was my hero.

It wasn't just because he was a geeky kid like me -- but better at math and science -- who suddenly had great powers and the concomitant great responsibility. And it wasn't just because he had super strength, could climb walls and shoot sticky web stuff from gadgets on his wrists (though I spent more time than I should have, strictly speaking, trying to figure out how to make my own web shooters).

It wasn't even that he could afford to live in New York City, the albeit scary 1970s version, on a freelance photo journalist's income because at nine, 10 or 11 years old, I didn't think about those things.

It was because this transformed super-geek was able to date hot babes, stacked, brick house babes a pre-pubescent ordinary geek like me could only think about and never possess.

First there was the gorgeous, platinum blonde Gwen Stacy.

Sweet Gwen, with her headbands, short skirts and gogo boots, murdered by the original Green Goblin, Norman Osborn, right before he accidentally killed himself.

Parker, my grieving hero, immediately found comfort in the arms of fiery red-headed Mary Jane Watson. Now there, THERE, was a woman. They went out. They dated. I -- the vicarious, invisible, third wheel -- tagged along.

One night, Peter Parker took her back to his place and...

KARA--BOOM! (No, really, that's what it said right in the bottom panel of page 3 of The Amazing Spider-Man, number 136.)

An explosion. Peter's place was laid waste by a bomb planted by Norman Osborn's son, Harry, who was going through a bad phase.

The Green Goblin was alive. Sort of. Thirteen issues later, so was Gwen Stacy (T.A.S-M, 149). And she was naked.

It was Autumn, 1975. Normal kids were probably watching Carl Yastrzemski, Fred Lynn and the Red Sox or Pete Rose, Joe Morgan and the Big Red Machine. I've read they played one heck of a World Series. Carlton Fisk willed a foul ball into a home run.

I missed it. I had other priorities.

Gwen. Gwen! (Shh... wait, I hear somebody coming up the stairs. Close the door!).

Man, she was beautiful and, in retrospect, tastefully rendered. Just enough play of light and shadow to leave most everything to the imagination. I had one. It worked really really well.

Suddenly my comic book was contraband, right up their with dad's copies of Playboy and the cheaper, more explicit knockoffs occasionally brandished by my delinquent friend around the corner.

Turns out Gwen was cloned by some heartbroken college science professor who never got over her death. Said professor was a bit off, given to emotional outbursts, enamored of his godliness and -- driven mad by guilt after accidentally killing a colleague -- transformed into some evil, clone-happy critter who called himself the Jackal.

(So much death, grief and madness in this Marvel universe. It was like a Russian lit class, only you know, fun and with pictures.)

He cloned Spider-Man, kidnapped his boss and ultimately died along with one of the homo-arachnae when he blew up the scoreboard at Shea Stadium. (Mets finished third that year). Deliberately left vague: which version of Peter Parker lived and which perished in the blast.

Gwen Stacy Mark II had seen enough to know that maybe paling around with either one wasn't good for her health. She split.

Peter -- one of them at least -- went home to Mary Jane, saying he had something to show her.

Some guys had all the luck. 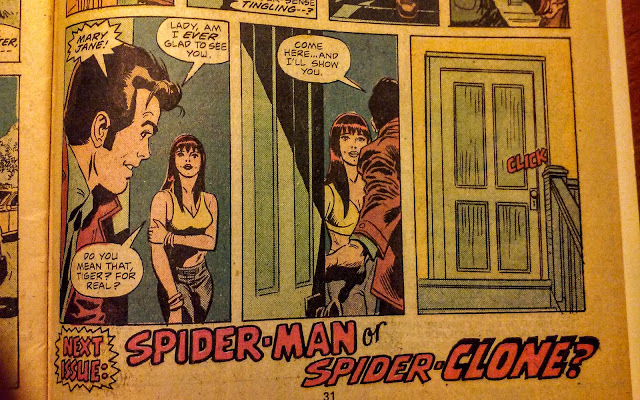