JOSH McCOWN STAMPED his right foot once, signaling the snap from center.

His New York Jets, having surrendered a 14 point lead to the Miami Dolphins, had the ball again with the score still tied 28-28, but buried at their 15 yard line with just 47 seconds left in regulation time.

My cousin, who grew up not far from the home of the 'phins, leaned over to me and predicted the Jets and McCown would run the ball once, perhaps twice, kill the clock and take their chances with overtime.

I concurred and as the Hard Rock Stadium crowd roared, watched McCown take the snap, then scramble toward the left sideline searching for an open receiver...

In my mind's eye, suddenly it was December 21 1997. Jets' ball, first and goal to go on the Detroit Lions' 9-yard line. A field goal would tie the game 13-13 with more than seven minutes to play. A win would send the Bill Parcells-era Jets to the playoffs for the first time.

QB Neil O'Donnell took the snap, handed the ball to rookie running back Leon Johnson, who scampered toward the right sideline then stopped abruptly before turning upfield and cocked his arm to heave the ball toward the end zone...

Thought coalesced, mouth agape, eyes wide with horror, all I could do was watch. 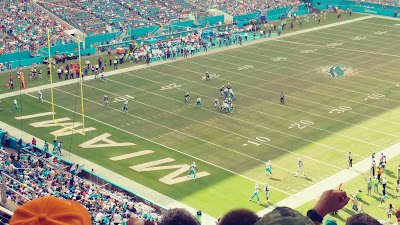 Then it was an errant pass to Lions defensive back Bryant Westbrook. Today it was Dolphin Bobby McCain.

Does it really matter?

The Parcells Era came and went, as did the Al Groh Interval, the Herman Edwards Epoch, the Man-Genius seasons and Blustersaurus Rex. To no avail.

Now we are in year three of Bowles, Todd and year 47 of Super Bowls, none.

Traumatized, shell-shocked, we persist in the hope of a different outcome.

What is the definition of insanity?