IT STARTS WITH THE LOW METALLIC SOUND of something coming alive, dawning, surging with energy and with urgency. Over the first 1:46 it gains a rhythmic momentum. Then, at 1:47, it gains a voice:


"I wanna run, I want to hide.
I wanna tear down the walls that hold me inside.
I wanna reach out, and touch the flame
where the streets have no name."

With that declaration -- 30 years ago this month -- U2's fifth studio album, The Joshua Tree, took off, catapulting the already-popular Irish rock group to global superstardom. 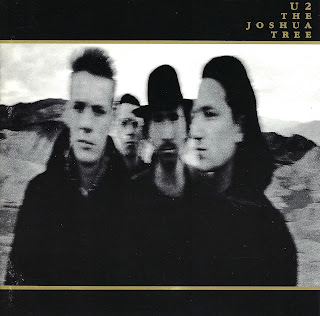 That cinematic first track, Where the Streets Have No Name, was a declaration of purpose. A sonic attack was coming, one aimed at the wide-open spaces of America.

U2 came, saw and kicked ass.

Four of the album's 11 tracks crashed the Billboard Hot 100. Two of them -- With or Without You and I Still Haven't Found What I'm Looking For -- went all the way to the top, a pair of number one hits from a band that sounded nothing like other acts dominating the charts that decade.

They weren't synth pop like Michael Jackson, George Michael or Madonna. They weren't turn it up to 11 arena rockers like Asia, Journey or Bon Jovi or heartland rockers like Bruce Springsteen, Bob Seeger and John Mellencamp.

U2's sound was spare, almost martial, dominated by Bono's mournful voice alternately quiet and soaring, augmented by the reverb-heavy guitar play of a man called The Edge. They were backed by Adam Clayton on bass and Larry Mullen Jr. on drums. It was a classic Beatles-style line-up, but the output was otherworldly.

To be sure, this band hailing from Dublin, not Liverpool, hit singles and all was no singles act and the power of The Joshua Tree is in the sustained message and mood of its 51-minute run time. The magic was in its sequencing.

It plays like a great mix tape. For just what that means, we turn to an authority on that topic: Championship Vinyl used record store proprietor Rob Gordon: High Fidelity author Nick Hornby's ode to rock music and arrested development, wasn't published until 1995. The movie version, starring John Cusack as Gordon, wouldn't hit theaters until 2000, but by then the rules for track sequencing were already well established.

And for whatever other conventions U2 may have discarded in their rise to planetary superstardom, they followed the mix tape formula to a tee on Tree:
Side A
Where the Streets Have No Name
I Still Haven't Found What I'm Looking For
With or Without You
Bullet the Blue Sky
Running to Stand Still
Side B
Red Hill Mining Town
In God's Country
I Trip Through Your Wires
Exit
Mothers of the Disappeared
Side A's first three tracks weave a kind of sonic spell, each song building on the one before it, until the discordant, wailing Bullet the Blue Sky, (a song about the terrible might of American airpower) brakes the reverie. The side closes with an intimate ballad about a failing relationship -- or, some say, drug addiction -- or perhaps about anyone trapped by circumstance and losing ground, delivered in mostly hushed tones and quiet piano-led instrumentation, Running to Stand Still.

Side B is simultaneously more powerful and less cohesive, its emotional climax coming with the searing elegy One Tree Hill, reportedly recorded in a single take. The final cuts, Exit and Mothers of the Disappeared seem almost unworthy followers. Given all that came before them, what could?

The Joshua Tree album topped the charts in nine different nations including the U.S., U.K., Canada and New Zealand, but oddly stalled at number 3 in Australia, and won the 1987 Grammy Award for Album of the Year.

An entire generation has been born, grown, gone through college, joined the workforce and started families since its release, yet -- in testament to the Joshua Tree's timeless power -- it still sounds current.

Email ThisBlogThis!Share to TwitterShare to FacebookShare to Pinterest
Labels: Entertainment, Music, U2