A PERPETUAL FIRE SALE. Anyone who came of age after the wrecked season of 1994 can be forgiven for thinking the Montreal Expos were never anything but that. Too all appearances they were a forlorn franchise in a foreign outpost whose destiny it was to develop top-flight players and then part with them.

The roster of the departed is as dazzling is it is dispiriting.
It wasn't always that way. There was a time when the Expos were a rising force in the National League with a roster that included ratified Hall of Famers Gary Carter and Andre Dawson, the Hall-worthy Tim Raines and ace reliever Jeff Reardon, a/k/a "The Terminator."

Their high-water mark was the strike-torn 1981 season. A microcosm of Expos' history, it ended sadly.


Though treading water for much of the 1970s, the team was accumulating talented players, starter Steve Rogers arrived in '73, Carter in '74, rifle-armed right fielder Ellis Valentine in '75, outfielder Warren Cromartie for keeps in '76, NL Rookie of the Year Dawson in '77, versatile Tim Wallach in '80 and Raines in '81, the year they dealt Valentine to the New York Mets for Reardon.

After finishing 10 games below. 500 in 1978, they burst into the upper echelon of the NL East, winning 95 games the next year and finishing two back of the eventual World Champion Pittsburg Pirates. Attendance at their cavernous concrete saucer, Olympic Stadium, jumped too, from 1.4 million to 2.1 million.

While winning just 90 games the next season, they edged closer, finishing a game behind the eventual World Champion Philadelphia Phillies as 2.2 million came to watch.

Finally, amid the rubble of the '81 split season, the Expos finished first in it's second half and then beat the Phillies in the first and last NL East Division Series for the right to play the Los Angeles Dodgers for the flag.


Opening the best-of-five round in L.A., the more experienced Dodgers won game 1, then dropped contests 2 and 3. The Expos now had two chances to win Canada's first pennant and do it in Montreal.


Game 4 was still 1-1 in the eighth when L.A. left fielder Dusty Baker singled and Dodger ironman Steve Garvey followed with a home run. The visitors tallied four more times in the ninth to put the game away, 7-1, and even the series at two wins a piece.

Game 5, for both sides, would be win-or-go-home.

Rookie sensation Fernando Valenzuela started for the Dodgers. His opponent was journeyman Ray Burris, who'd out pitched the phenom in game 2, shutting out L.A., 3-0. Each allowed only allowed a single run scored on a ground ball out. After eight innings, the score stood 1-1.

Expos rookie manager Jim Fanning summoned Rogers, a starter who'd gone 12-8 during the abbreviated campaign, to pitch the ninth. He retired Garvey on a first-pitch pop up, then third-sacker Ron Cey on a deep fly to left.

What happened next may have been the first domino in the long chain of events that destroyed the Expos. 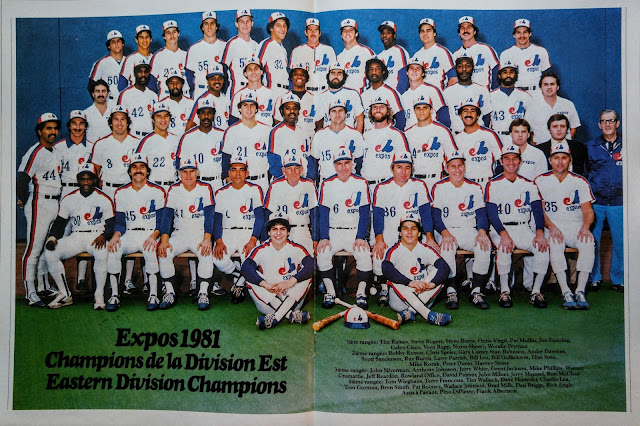 Rogers fell behind Rick Monday, 3-1, then left a pitch up and out over the plate. The Dodger right fielder crushed it. Dawson chased the ball as far as the field would let him, stopping only at a fence too high for heroics, and watched it sail out of sight. A half inning later, L.A. would win 2-1.

Blue Monday, they called it. To this day, it remains the closest the Expos and their lineal descendants, the Nationals, have ever gotten to the World Series.

Attendance climbed to 2.3 million in '82 and '83, but the team's performance slipped, triggering an era of rebuilding. Carter departed, as did Dawson and Raines, but eventually new heroes arrived. Another strike, in '94, ended the season at mid-year with the Expos holding a suddenly worthless 74-40 record, the best in baseball.

Caught short by the resulting new economics of baseball, they never recovered.